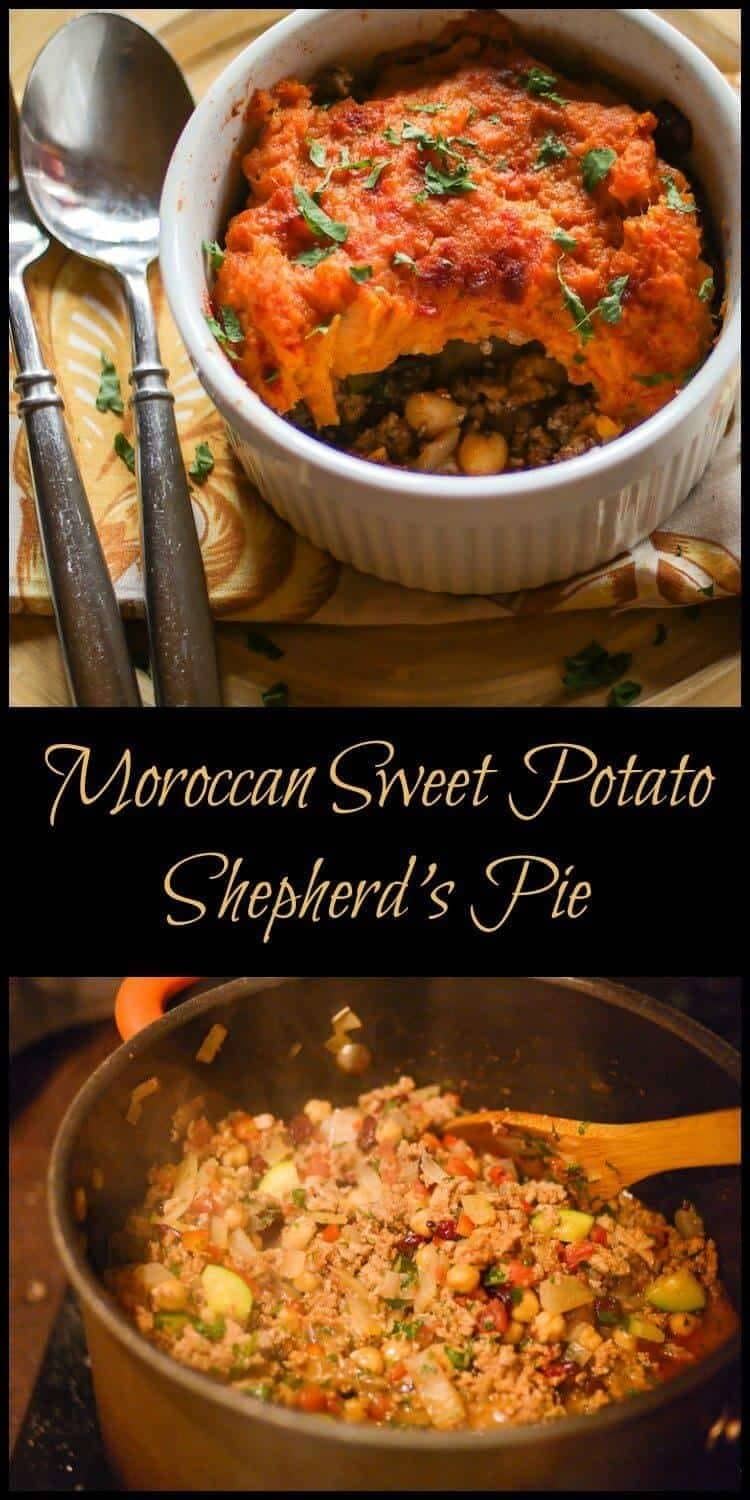 The warm, aromatic spices of Moroccan cuisine combine with healthy ingredients in this robust dish reminiscent of a shepherd's pie... Moroccan Sweet Potato Shepherd's Pie is comfort food with an exotic twist!

Without fingers, the hand would be a spoon.

My earliest experience with Moroccan food was in the late 1980s when my husband was a professor at UC Irvine. It was his first job, and while money was still tight, we were no longer an impoverished grad student's family. At age 28, I was already an accomplished home cook, so when we celebrated an anniversary, we looked for a restaurant that provided a unique experience... a food adventure. We discovered the Marrakesh in Newport Beach. They're still going strong 25 years later! Patrons are seated on low couches in private tent-like booths. The exotic atmosphere, and eating with one's hands definitely qualified as "adventure" at that point in my life. I fell in love with the spices and combination of the sweet and savory flavors that are typical of Moroccan cooking.

A typical spicy stew from Morocco might contain warm and aromatic spices like cinnamon, cumin, and paprika, hearty vegetables like sweet potatoes, eggplant, and zucchini, and proteins like chick peas (awesome for vegetarians), lamb and mutton, chicken, and beef. It has only been in the last decade, that I began experimenting with the Moroccan flavor profile, and coming up with my own recipes. My Moroccan Sweet Potato Shepherd's Pie was a gamble, but it paid off. A spicy stew is topped with subtle cinnamon infused mashed sweet potatoes - much like a shepherd's pie.

Ground lamb would be more traditional, and would be a worthy substitute, but I chose lean ground turkey to reduce the fat. Raisins, currants, and dried cherries would be a standard addition, but I love the dried cranberries. I love the textural impact of chick peas in the stew, so I use both ground turkey and chick peas. A vegan/vegetarian could easily omit the ground turkey, add an extra can of chick peas, and enjoy this flavorful and healthy dish. Zucchini is available year-round in Las Cruces, and works well. However, eggplant would also be delicious. It just takes a little more time to prepare. I add chopped fresh cilantro just before turning the heat off. We do have a friend that has an aversion to cilantro. Scientific research shows that there is a genetic explanation for this aversion to cilantro that is linked to taste and smell. If cilantro is a problem, either omit it, or substitute chopped Italian parsley. 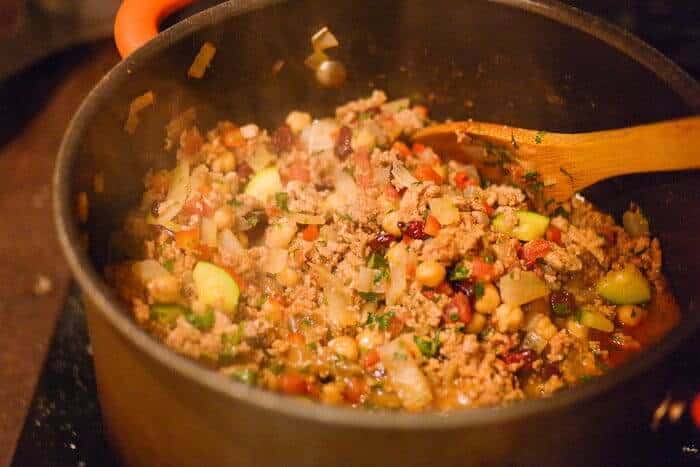 You might notice the vivid hue of the sweet potato mash in the photos. My natural foods market had garnet sweet potatoes that impart the most beautiful color to this dish. I prefer to add coconut creamer to the mash - again to reduce fat and calories - but you may prefer dairy or almond milk. I did not use butter, but I won't tell if you do! 🙂 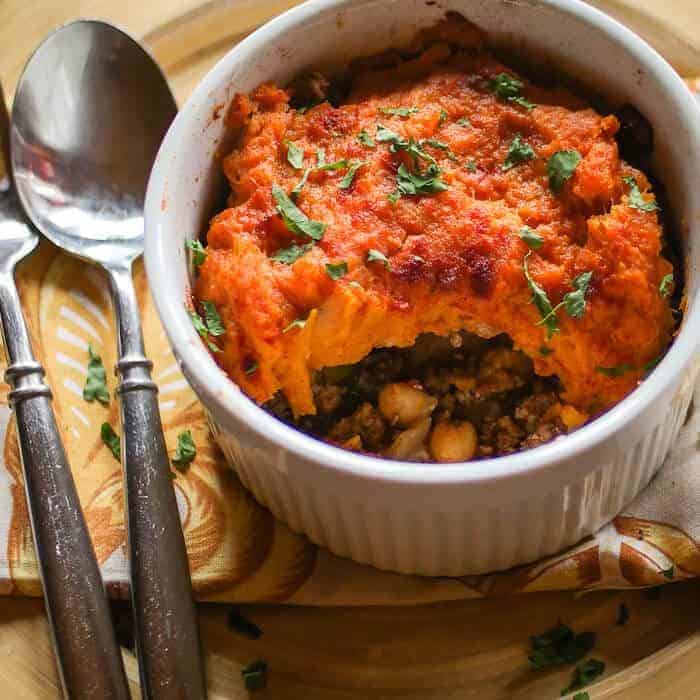 * You will want to zest the lemon prior to squeezing the juice for the stew so that you have it for the sweet potatoes.

** I like coconut creamer in this dish because of the reduced fat and calories. It provides the creamy texture I love from half n half. You may substitute milk, almond milk, half n half, or even broth.

This dish works for vegan/vegetarian diets. Omit the ground turkey, and add an additional 2 cans of chick peas. For vegan diets, use almond milk or coconut creamer.

You can substitute dried cherries, currants, raisins, or golden raisins for the dried cranberries.

You can substitute ground lamb or ground beef for the ground turkey.

You can substitute eggplant for the zucchini. Be creative.

Macronutrients are an approximation only using MyFitnessPal.com