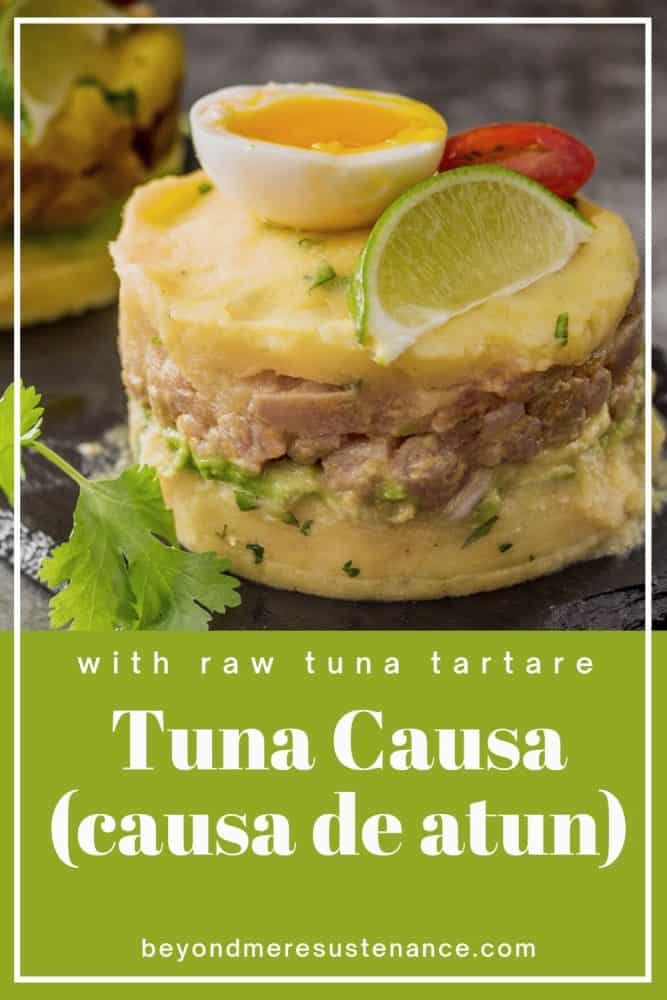 The classic layered Peruvian Tuna Causa Recipe with a twist - citrusy raw tuna tartare and avocado is layered with lime and ají amarillo infused mashed potatoes. Causa de atún (tuna causa) is elegant in its simplicity, and sure to impress! This causa can be served as a starter or as a main dish, and they're gluten and dairy free!

Causa, AKA causa rellena, is a classic Peruvian appetizer found all over Peru. "Causa" is the Spanish word for "cause," but there are different explanations for its origins. Causa may derive from the Andean indigenous Quechua language word "kausay." Kausay is their word for "life," and until the Spanish changed the word to "papa," it was also used for "potato."

Having spent a great deal of time in the Andes, and with the Quechua people, this makes perfect sense. High in the Andes mountains, potatoes were the main sustenance. Even in modern times, in the remote high country, potatoes are "life." The earliest versions of causa were probably nothing more than an ají amarillo chile pepper between 2 slices of potato. It wasn't until the Spanish conquered Peru that limes (and other citrus) began to make an appearance in Peruvian food.

Another chapter in the evolution of the causa takes place during the War of the Pacific in the late 19th century. The wives of the soldiers would prepare causa for their husbands, and hand them to them with the patriotic words "para la causa," which literally translates "for the cause" (of the war). This bit of trivia serves me well; I need to practice my Spanish!

Causas are made in a variety of ways, and with a variety of ingredients, the constant being the flavorful mashed potato mix. Tuna and chicken "salad" - combined with red onion and a bit of mayonnaise are very common. Ceviche is not as typical, but appears on menus along the coast of Peru with their abundance of fresh fish. The dish lends itself well to a variety of vegetarian fillings like mushrooms, chiles, and squash.

It was Peruvian ceviche and tuna tartare that inspired my tuna causa recipe. I LOVE raw tuna. Its firm, meaty texture is superb in a raw fish dish. The flash frozen ahi tuna I use holds up beautifully in these layered potato stacks.

2. Prepare the tuna tartare - This is my Latin-style tuna tartare recipe. Use a slotted spoon to layer it after the avocados and first layer of mashed potatoes.

Note: As an Amazon Associate I earn from qualifying purchases at no additional cost to you. This helps to offset the costs of maintaining my blog and creating awesome content! 😊

We enjoy these raw tuna tartare causas with a dry rosé. A crisp, dry wine with a bit of acidity is perfect. A farmhouse saison is a good option for craft beer lovers!

As I mentioned earlier, one causa is enough for me with a salad. What comes to mind immediately? A radish, Lima bean, queso fresco, giant corn, and tomato salad. A more elaborate but equally tasty choice is a Peruvian solterito salad.

Macronutrients are an approximation only from MyFitnessPal.com using 12 ounces of ahi tuna and 2 pounds of potatoes.