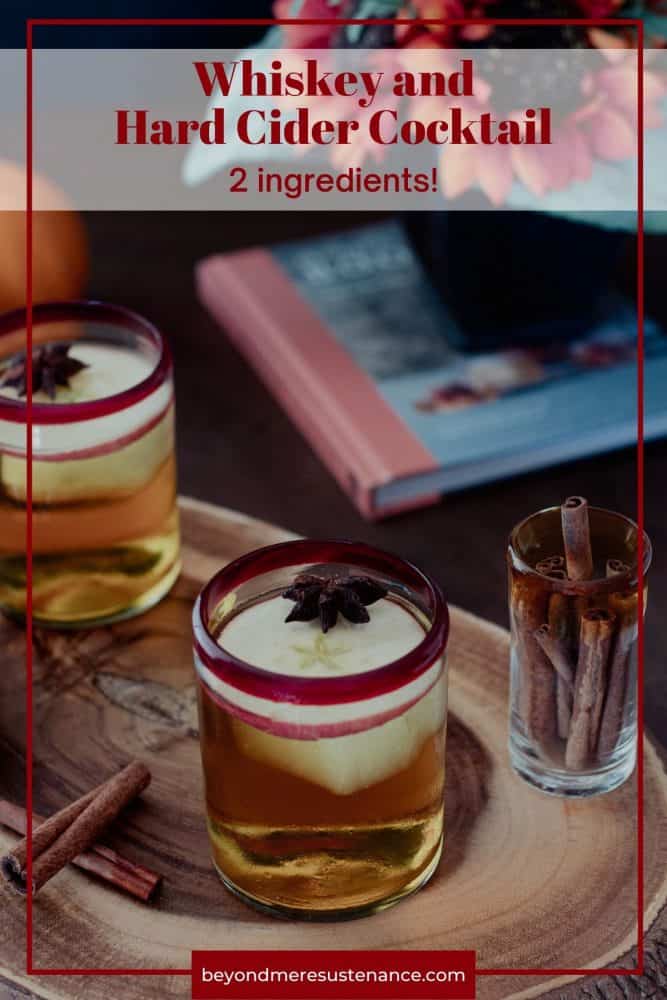 Autumn has arrived, and this Whiskey and Hard Cider Cocktail speaks to the season with crisp apple flavor and warm, spicy whiskey. With just two ingredients - hard apple cider and cinnamon whiskey (like Fireball) - it comes together in just minutes. It's sure to become a new fall favorite!

What speaks to you when you think of fall? For this girl that doesn't live in a region with seasons, it's apples, pumpkins, winter squash, and thinking about the holidays. While it's still really warm outside, I navigate from hearty salads and grilled fare to stews and saucy dishes. I love dishes cooked in the Dutch oven, posole, and fall cocktails.

So, every fall, I try to work on a new fall cocktail. I am not a fan of sweet cocktails, but I love all things apple. I've not worked with hard cider until now, but I'm a true believer! It's not too sweet, but it packs an apple punch that is really appealing. I felt like hard cider could handle an infused spirit like a cinnamon whiskey, and result in a lovely fall cocktail. I was correct!

What is hard cider?

Simply put, hard cider is fermented apple juice. Yeast and apple juice are combined in a tank or a barrel. The yeast will "eat" the sugars, converting them to alcohol, until fermentation is stopped. The higher the sugar content of the juice, the longer it will take to complete fermentation. Two to four weeks is typical.

After fermentation is completed, it will either be passed through a filter, or not, then it will be carbonated and bottled.

Traditionally, cider was made with cider apples - a small apple similar to a crabapple - that tend to be higher in acidity, tannins, and/or sugar. However, many brands do use culinary apples (apples for snacking and baking). You'll find hard ciders that have been blended with other fruits either after or during the fermenting process.

You'll find hard apple ciders in brut (extra dry), dry, off-dry/semi-sweet, and sweet. You will find many other flavors as well. For purposes of this whiskey and hard cider cocktail, you'll want to stick with hard apple cider.

You will want to consider your preference for sweet versus dry. My interest in hard cider is relatively new, but I know I prefer bold, dry wines and craft beers, and don't find many sweet cocktails that I would have a second time. When I chose the Angry Orchard Hard Cider for photos, I didn't realize it was on the sweeter side. "Crisp Apple" signaled to me that it was not. If you like somewhat sweet beverages, you'll likely love it. I prefer bone dry, so I'm going to be testing the recipe with some dry ciders. I'll be sure to update this post!

Why mix with cinnamon whiskey?

Cinnamon and apples make a perfect pairing for fall IMHO. I love to make infused spirits, so I started an infused whiskey with cinnamon sticks and star anise. In a few days, I plan to add dried ancho chile peppers. I promise an update on the results. In the meantime, Fireball whiskey tastes great. It's a little on the sweet side, but I love the red hot cinnamon flavor it brings to the cocktail. There are many brands of cinnamon whiskey, and most (if not all) bring some burn to the spirit. Check out The 10 Most Popular Cinnamon Whiskey Brands for some recommendations.

What kind of cocktail glasses are best for this hard cider cocktail?

Most rocks glasses are a little on the small side for this cocktail once you add a large ice cube. My red-rimmed rocks glasses are 12 ounces, and they worked really well. We split one bottle of hard cider between our 2 cocktails, and it was perfect. At 12 ounces per bottle, that puts 6 ounces in each glass. With 2 ounces of cinnamon whiskey, and an ice cube, you need an appropriate glass. Ten to 12 ounces is about right.

Is this a good party cocktail?

I think so. It doesn't really work to pre-mix it because the cider could go flat. However, with only 2 ingredients, it's super quick and easy to make per guest!

One large ice cube reduces dilution of the cocktail. However, they require a somewhat wide opening. A largish rocks glass (refer to photos) is a great option. Mine are 12 ounces. Some highball glasses will work well. I prefer to limit the hard cider to 6 ounces to allow the cinnamon whiskey to shine. Of course you can adjust to your preference! Be creative!

The hard apple cider is carbonated, making it a poor candidate for a large batch cocktail. However, with only 2 ingredients, this is super easy to make per guest. I would not rule it out for a holiday party!

With the holidays fast upon us, I'm excited to try this new fall cocktail out on my guests. I may have an opportunity next month when I have several of the ladies from my church (good Episcopalians!) over for a happy hour party! 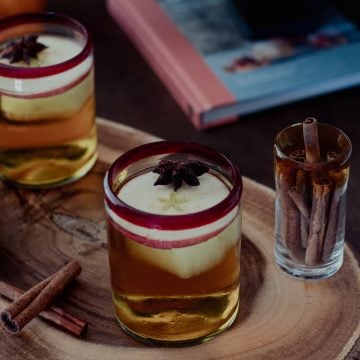 NOTE: If you really want to taste the cinnamon whiskey, 3 ounces per drink is better... I won't tell! The other option is to reduce the amount of hard cider.

NOTE: Macronutrients are an approximation only using unbranded ingredients and MyFitnessPal.com. Please do your own research with the products you’re using if you have a serious health issue or are following a specific diet.

Did you make this recipe? Please leave a comment and/or star rating! Email us with any questions: tamara@beyondmeresustenance.com