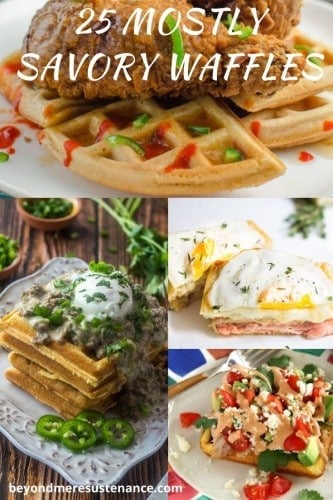 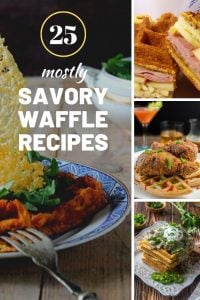 Crispy on the outside, fluffy on the inside epitomizes waffle perfection! A crispy and fluffy buttermilk waffle is certainly not to be discounted, but today's waffles push the proverbial envelope. 25 Mostly Savory Waffle Recipes? Yes please. 😯 From Savory Falafel Waffles With Artichoke Tzatziki to Cornbread Waffles With Chicken, Avocado, and Sweet and Spicy Crema, waffles can be a substantial main dish for brunch or dinner!

The first known waffle recipe was written in the 14th century by a young French husband to his young wife. His recipe included beating some eggs with salt and wine, flour was to be added, and the mixture was to be poured into an iron that cooked on both sides. He did not include leavening in the recipe, but did have variations that included placing cheese between two layers of waffle batter (savory waffles even back then!)...

Fast forward several centuries, and waffles became a favorite sweet breakfast treat with powdered sugar, maple syrup, fruit, etc. In recent years, though, waffles have evolved to include both sweet and savory ingredients, and a variety of grains and leavening methods.

I am writing to you today from Charlotte, NC. while visiting and helping to care for my new grandson Carter James Andersen (born July 7) and my 2 year-old grandson Cade Christian Andersen. 🙂 Developing, testing, and photographing new recipes is a bit out of the question right now, so it's a great time to gather some awesome waffle recipes from a few of my food blogging friends!

This group includes both vegetarian and non-vegetarian savory waffle recipes. Add a side salad or fresh fruit, and you've got a spectactular brunch or dinner meal!

Savory Falafel Waffles With Artichoke Tzatziki from The Organic Dietician

Cornbread Waffle With Chicken, Avocado, and Sweet and Spicy Crema  from Shockingly Delicious

Waffle Sandwich from Homemade and Yummy

Savory Buckwheat Waffle With Spinach, Crimini, and Caramelized Onion from Beyond Mere Sustenance

This group includes savory waffle recipes that aren't quite a meal, but would make an excellent side dish (ie. an alternative to rice or pasta). You might even consider 2 waffles in place of the bread in a sandwich... If you don't mind the carbs and calories! 🙂

Sweet Potato and Spring Onion Waffles from Every Nook and Cranny

Savory Cheddar and Jalapeño Waffles from Rhubarb and Honey

Ham and Manchego Waffles from Garlic and Zest

This last group includes sweet waffles (because we all need to indulge now and then!). 😀 These are not your typical sweet waffles, however, and you simply must scroll all the way to the end!

Spiced Peaches and Malted Waffles from Basil and Bubbly

Banana Split Waffles from Cravings of a Lunatic

Is that enough to whet your appetite? If you haven't tried savory waffles, don't you want to?

If you don't currently own a waffle iron, I highly recommend consider purchasing one... and now, a very busy 2 year-old needs some Gramma loves.  😀

Get the exclusive content you crave straight to your inbox.

A LITTLE ABOUT ME…